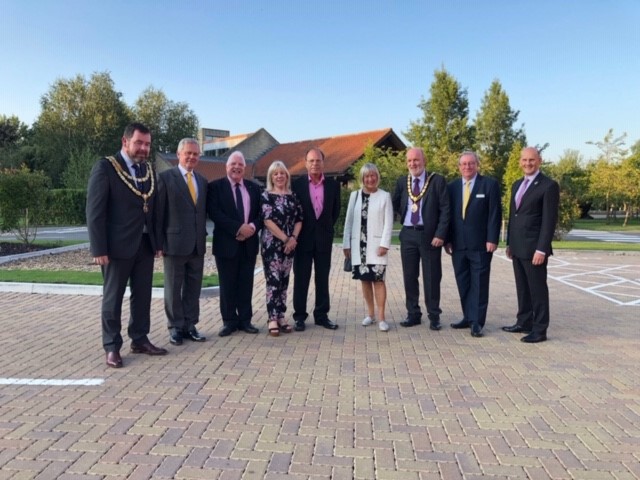 West Suffolk Crematorium opened for business on 31st July 1989 and so has been serving West Suffolk and surrounding areas for 30 years. Westerleigh was proud to mark this significant milestone with a weekend of events.

A Prosecco Reception and buffet supper was held in the Hospitality Suite at the Crematorium on Friday 2nd August with around 65 guests attending made up of local Funeral Directors, Clergy and Celebrants together with a number of VIP guests representing the Funeral Service industry. Special guests were Peter Elmes who first had the idea of building the Crematorium in the mid 1980’s and went on to be the first Managing Director and Chris Johns who was the first Manager. Following the drinks reception there was an opportunity to take a tour of the site which included both Chapels, the Crematory the grounds and the Hospitality Suite and two groups were taken around each starting in a different Chapel.

The history of the Crematorium is interesting:

Peter Elmes of L. Fulcher and Company, whose vision it had been, managed the project on behalf of the highly respected funeral company J. H. Kenyon of London. Peter as a busy Funeral Director was frustrated by the journey time taken from Bury St. Edmunds to Cambridge Crematorium and so set up a working group to look into the feasibility of building a new crematorium close to Bury.

The owning consortium at that time was made up of 80% Kenyon Securities, 10% Pompes Funebres Generales (a French Corporate Undertaker) and 10% The London Cremation Company owners of the world-famous Golders Green Crematorium. The company traded as West Suffolk Crematorium Company Ltd.

The local architects were Hugh Thomas Associates in Bury St Edmunds and he and his colleague Mark Miller were regular visitors as work progressed with the main contractor Bakers of Thurston. Shortly after opening major change to the British funeral industry occurred with the amalgamation of several companies including J H Kenyon into the PHKI Group which included the French PFG company and ultimately this conglomerate became S.C.I. and then Dignity Funerals. Not long after PHKI was formed they sold the crematorium to its present owners Westerleigh Group.

The design of the buildings has proved to have worked well over the last 30 years and the St. Edmunds Chapel still looks fresh today.

The crematorium very soon became established and has always provided a first class service to the Bereaved. In 2015 the decision was made to design a second Chapel so as to help reduce the waiting time for services at peak times and the plans included a Hospitality Suite.

The Abbey Chapel was opened in March 2018 followed by the Hospitality Suite in June 2018. The Builders were excellent and over the 18 months construction period the crematorium operated as usual with no interruption to services.

A presentation was made to Royna to mark this very significant milestone of service to the Bereaved and I was proud to be able to make this on behalf of all of her Westerleigh colleagues.